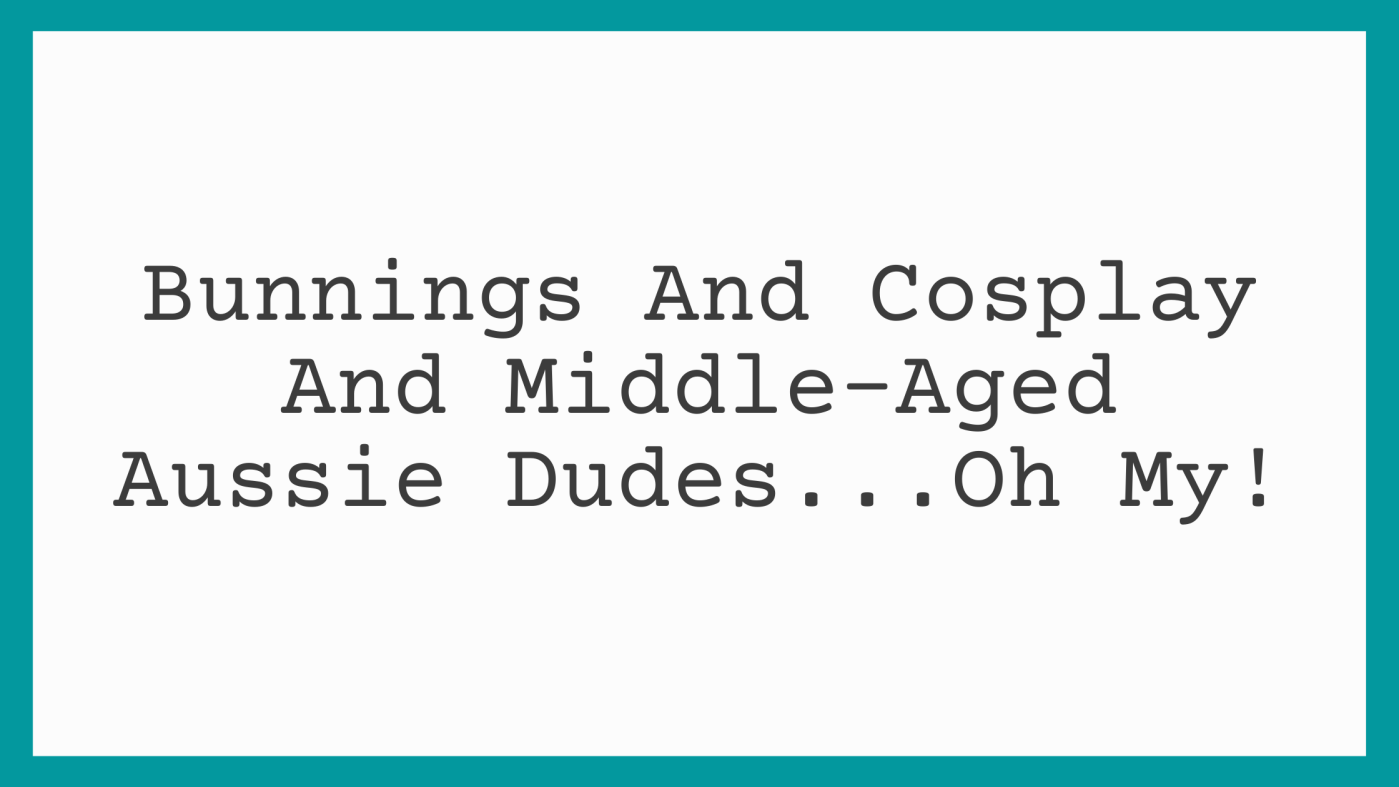 Be me, doing my best emo kid impression (MCR tee, black jeans, skull earrings, blue hair, the lot) at Bunnings yesterday afternoon, faced with the unabated curiosity of a middle-aged white dude wearing a wife beater. The visit was for the sole purpose of finding materials to use to make Jester Lavorre and Fjord Stone costumes for the Oz Comic Con Pop-Up event this coming weekend.

For reference, Jester Lavorre is a little blue tiefling created by the wonderful Laura Bailey for Critical Role’s second Dungeons & Dragons campaign. Fjord Stone is a half-orc created by Travis Willingham for the same stream. They look a little something like this…

So, I spy these huge sheets of foam insulation board that would be PERFECT for sculpting an oversized spectral lollipop (if you know, you know). Great! Ad also picks up a foam board of his own to sculpt a falchion (a falchion is a type of sword, for the uninitiated) for his cosplay. We’re good to go!

So we checkout and we lug these monstrous pieces of foam board back to the car. As we struggle to fit the damn things in Adam’s Kia Cerato hatchback, a car starts pulling out of the parking spot next to us.

“What are you using those for?”

I was slightly startled as my energy and attention at this point had been trying to figure out how we’d get these boards home if we couldn’t fit them in the car. I turned around and there’s your classic middle-aged, white Aussie dude hanging out the window, looking directly at me, asking me what we were going to use these boards for.

I considered lying. But I had no clue what these boards were actually used for so that was out of the question. He’d call me out on my bullshit immediately. He had this look in his eye that he was going to get to the bottom of this foam board mystery if it was the last thing he did.

So, this 27 year old, washed-up emo kid who plans on crafting a huge lollipop out of said foam, painting it pink and using it as a cosplay prop at an upcoming con said, awkwardly, to the white, middle-aged man wearing a wife beater, hanging out the window of his Holden Commodore knowing full well he probably has no fucking clue what cosplay is…

“Oh, I knew it would be for something odd. Just didn’t know what.”

Me, reeling from waves of social anxiety and trying to figure out whether I’d just copped a backhanded insult or whether being called odd is a complement for me now…

Still reeling from a social encounter that I was 0% prepared for, I reply…

And I wave awkwardly as he drives off into the metaphorical sunset.

I mean, it was nice of him to take an interest, right? I just wish I wasn’t so preoccupied with a foam board and stunned from the shock of an out-of-the-blue conversation to actually hold a conversation. Not that that’s my strong point at the best of times…

He was nice enough about it and props to him for asking a complete stranger what in the fuck they planned on doing with two pieces of foam board.

Oh, and one more thing. Anybody who knows what foam insulation board is used for, is it really that strange to just buy two pieces of it? Is it usually a 20 pieces or nothing thing? I’ve been trying to figure out why this guy took such an interest so maybe it was that we’d only bought enough to put in a doll house or something that piqued his curiosity? If you know, let me know!

Cosplayers, do you have any stories of being asked about your cosplay materials or your costumes that was super out of the blue and unexpected?

And before you ask, yes, of course we got ourselves a Bunnings snag before we left. We may be odd but we’re not monsters.

3 thoughts on “Bunnings And Cosplay And Middle-Aged Aussie Dudes…Oh My!”