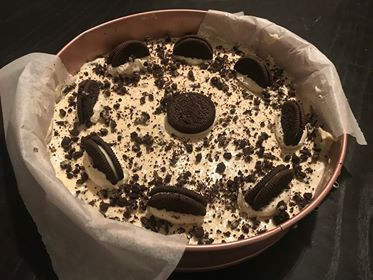 Oh man. You guys. This fkn recipe. I swear if I didn’t know better, I’d consider myself an actual dessert chef after turning a simple vanilla cheesecake recipe into a goddamn cookies and cream sensation. You can also easily ditch the cookies and cream related ingredients and replace with whatever you like!

Recipe below with tips throughout.

What the heck do you need?

150g butter, melted (I found that 150g butter was a little too much so feel free to reduce the quantity a little)

How the heck do you do this?

Grease a springform pan with an approximately 20cm round base. Layer strips of baking paper on top of whatever you use to grease it for ease of removal.

1 pack for the filling

½ pack for the decoration

Using a food processor, process the biscuits until they’re a fine crumb (or put them in sandwich bags and smash them with a rolling pin until they’re well broken – whatever works).

Process (or mix with hands or a fork in a bowl) until combined.

Press the biscuit mixture over base of prepared pan.

While the base is cooling off, mix the gelatine according to the pack instructions. Whisk with a fork until it has all dissolved. Set aside to cool.

Using an electric mixer (or a fork and some elbow grease – I wouldn’t recommend this but I didn’t have a mixer so had to put in the hard yards), beat cream cheese, sugar and vanilla until light and fluffy.

Fold in whipped cream (again, I bought thickened cream and had to whip it by hand – would not recommend but is doable if you convince your boyfriend to sub in when your arm is dead).

Process (or smash) the Oreos that were set aside for the filling (you can either keep the cream in these or remove it. Fold these into the mixture.

Pour the mixture into the prepared pan. Spread it out and level it off on top. Make some cool patterns in it, if you like.

Refrigerate overnight or until set.

Remove the cheesecake from the pan (check that it has fully set before doing so – trust me on this).

Decorate as you see fit using whole Oreo’s, smashed Oreos, Oreo filling – whatever the heck you like!

Eat a shitload of delicious cheesecake.

If you try this recipe out, let me know. Any suggestions or adjustments, send them on through 🙂